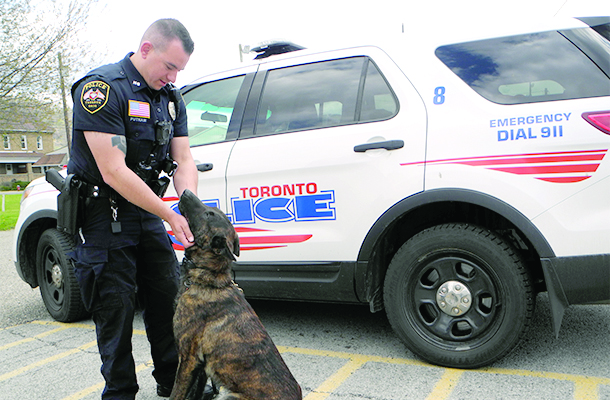 TORONTO — The Toronto Police Department has a new member who won’t be requiring a uniform or weapon.

Luna, a 1-year-old female Dutch shepherd, has joined Patrolman P.J. Putnam as one half of the department’s new K-9 unit. Putnam said Luna will bring her talents at sniffing out drugs, people and many things handled by a human.

“She can search for anything with a human scent,” said Putnam, who has been with the city police department for a year and a half and became the other half of the K-9 unit two months ago.

Putnam said in addition to aiding in searches for drugs and other evidence, Luna can assist in searches for suspects or missing persons because she is able to detect the rush of adrenaline experienced by a frightened individual.

The dog also can detect disturbances of grass and other ground covering that would go unnoticed by most people.

He said K-9s of Valor, a nonprofit organization in Kent, has donated a trauma kit to treat Luna should she become injured in the line of duty and a kit containing Narcan in the event she should be exposed to a narcotic drug since some, such as fentanyl, require little contact to produce an effect.

“Narcan be used to treat dogs as well as people,” Putnam said.

Putnam said he and Luna will be available to aid other law enforcement agencies when needed.

The two received four months of training to serve as a K-9 Unit through Tri-State Canine Services of Warren. Operated by a K-9 officer, the business has supplied 17 police dogs to Ohio Valley law enforcement agencies.

While officers working with German shepherds in K-9 units often use German commands, Luna responds to a mix of German, Dutch and English commands, Putnam said.

To serve the public, the two had to undergo testing and certification by the Ohio Police Officer Training Academy.

A Jefferson County native, Putnam said he became interested in working with a police dog after observing the K-9 unit in the Belmont County Sheriff’s Department, where he worked previously.

“It also helps that I’ve always been an animal lover,” he said.

When Luna is not on the job, she lives with Putnam, his wife and their Mountain Cur, Chloe. He said he slowly exposed Luna to the smaller dog and they get along well while sharing separate sleeping quarters.

Putnam said being young, Luna is energetic and enjoys running and playing fetch at local athletic fields while off-duty. He added that fortunately, she also likes going for rides in cars since much of her work time is spent on patrols with him.

He said Luna will be 2 in July and will likely retire at age or 7 or 8, at which time she will spend her retirement as his pet.

Putnam noted K-9 units aren’t interchangeable and if he were to work with another police dog, he would have to undergo new training with it.

He said the public shouldn’t come close to Luna or attempt to pet her because she is protective of him as well as being trained to apprehend criminals by force and could misinterpret their actions.

But Putnam said there are plans to visit local schools and civic groups, if desired, so the public can become familiar with the K-9 Unit. He said plans to do that were delayed by the pandemic, which closed local schools and brought a temporary end to many social gatherings.

(Scott can be contacted at [email protected])

Today’s breaking news and more in your inbox

How to Teach your Puppy to Sit and Stay

Pets and separation anxiety: Experts reveal how to settle your pet when you return to work